Also from the attic: an artifact from Y2K

No, not from the months of dread, anticipating an event that didn't happen. From the year 2000 itself.

As I clear out clutter from the spare room, I derive a possibly perverse pleasure from coming across old computer magazines, like this one from March 2000: 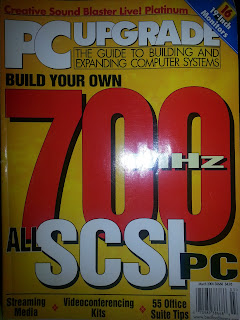 The cover story details how to build "a powerhouse system" with the fastest desktop processor - AMD's 700 MHz Athlon - and components designed with the Small Computer System Interface, including a 9 GB hard drive. Total cost: $3,345.

In March, 2000, I could only dream. Now, for one-tenth the price, I can have a computer that blows away that powerhouse system in every respect - in my pocket.

In fact, it occurred to me at 1:58 a.m. on a recent night that my phone may actually be the most powerful computer I have ever owned - not only because of its hardware specs, which my desktop handily beats, because of its flexibility: my desktop does not take photos, shoot video or record audio, nor can I use it to switch between email accounts without logging out and logging back in to each one.

Back to the magazine - even more delightful than the celebration of a processor with less than half the speed of one of my phone's two cores, and the $395 price tag for a hard drive slightly larger than the microSD card that came installed on my last cell phone (an HTC Evo 4G), is this letter published in a column titled "The Hardware Doctor":