For my sisters after the flesh

I just came across this page about a South African singer named Mshoza and her physical transformation. 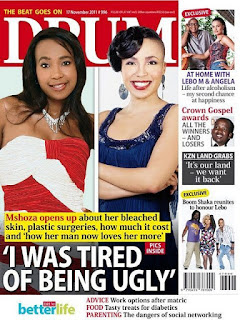 I don't know Mshoza from a can of paint, but what she has done to herself makes my heart ache for her. Who told that lady on the left that she was ugly, and why did she believe them?

Whoever it was, I wish I could punch them in the face. But even that would not change the belief problem. Maybe the simplest solution for that is a hearty dose of "Well, THAT"S stupid!"

For my part, I consider women beautiful, and Black women especially so.

By "beautiful," I do not simply mean sexually attractive. I mean aesthetically pleasing, with the curves not just of their hips or breasts but also of their noses and earlobes; the bend of a knee, the grace of a finger. Skin. Hair.

I am grateful for my wife and don't even want to want anybody else sexually; I hope that she knows that I find her beautiful (I've told her, but have I told her enough?).

But sometimes I also want to let other women know that I find them beautiful. I want to tell them.

Especially Black women. Because I know that so many have received so many messages throughout their lives that boil down to, "You're ugly."

Your skin is too dark. Your hair is too nappy. Your nose is too broad. Your lips are too thick. Your entire body is too thick.

You need chemicals, you need bleach, you need surgery.

I grew up with a really strong fear of offending women, which was exacerbated when social shifts seemed to deconstruct all the rules about how a gentleman should treat a lady - indeed, to deconstruct the very ideas of "gentleman" and "lady." Complimenting a woman on her appearance - not just her clothes, but her physical self - has become verboten.

So I'll be with someone in a social setting or a work setting, and when I want to say something like, "You're beautiful," I'll settle for complimenting her hair or her outfit (both of which are allowed). Or I don't say anything at all.

Maybe I'll experiment in 2013. Maybe I'll say "pretty" instead of "beautiful." Maybe I'll see if I can defuse any potential awkwardness by asking permission:

"I don't mean to be inappropriate, but is it okay if I tell you that I think you're awfully pretty?"

Meanwhile, if you're a Black woman reading this, consider yourself...appreciated.
at 5:33 PM

Thank you for this! This is a very powerful article and I stand in agreement, particularly on the role black men should play in the healing process. In the words of Michael Eric Dyson, "When we love black women, we love ourselves and the God who made us"

Thanks, Mr. Burgess. I might steal that quote sometime :)

Elwin,
Thank you so much for this affirmation of beauty that black women do not get enough of. As one of the darker sisters, I certainly can relate to those feelings of ugliness that I had growing up. I tried my darnedest to affirm the beauty of my brown daughters. However, in one heartbreaking conversation with my oldest daughter, a beautiful dark chocolate young woman, I learned that she still had to endure the taunts, teases and ignorant comments of other young African Americans, who obviously had been brainwashed and white washed regarding our beauty. Sadly, it was her white friends who lifted her up and told her she skin was gorgeous. It truly made me cry to realize that yet another generation suffered from this self-hate and that another young black girl had to cry herself to sleep thinking she was ugly.

I'm going to post this link so that my FB firends read it and hopefully, take it to heart.

Once again, I thank you. You can't know how much this means to me and my daughters and all the other black women who have to affirm ourselves everyday.

Thanks for the response, Ms. Monica. Your story has me searching my memory, trying to remember if any movies/TV shows have ever done a good job of portraying the pain you describe. Can you think of any? If not, it seems like a big cultural gap.