On Saturday, Oct. 6, Janet and I went over to City Theatre, taking our goddaughter, Catherine, to see her dad, who acts under the stage/screen name Atticus Cain, perform in the City's Young Playwright's Festival.

The festival presented six short plays by middle- and high-schoolers, three in the afternoon and three in the evening. Between the two sets, we all hung out in South Side Works for a while, then Atticus dropped the three of us off while he went to prepare. And Janet, Catherine and I wound up at this place - The Milk Shake Factory: 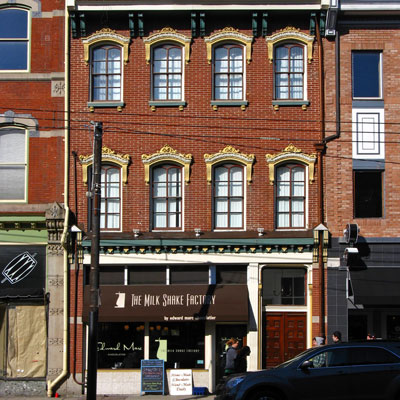 As we hung out there for bit, I puzzled over the question of whether The Milk Shake Factory used to be a retail store for Geoffrey Boehm Chocolates, a Lawrenceville-based candy maker that I worked for in the late 70s (I was a delivery driver).

I saw that the shop was full of goods from Edward Marc Chocolatier, and when I read the company story printed on the packages, I was 99% certain that it was the story of the same family that I had worked for. There were two brothers, Jeff and Bruce Edwards, their mom, whose name was Marie but who went by the nickname "Sissy," and her mom (or mom-in-law?), whom I only knew as "Ya-Ya."

They were Greek, with Ya-Ya having come over from the Old Country in..Lord knows when. And they exhibited the energy that some associate with Mediterranean folk - when I first started working there, I thought the company was in crisis because they all yelled so much. I finally realized that that was simply their way. They'd yell at each other and then I'd turn around and they'd be laughing with each other, just as loudly.

They were Christians, and like many in the late '70s, were involved in the charismatic movement (as was I). And again, they were as demonstrative in their faith as they were in everything else.

The brothers, Jeff and Bruce, were only a few years apart, but somehow were as different as they were alike. Jeff, the older, was more the hard-charging businessman; he wore suits and spent most of his time in the office, when he wasn't out on sales calls. Bruce was more inclined toward gentleness; he wore a baker's apron while he stirred massive batches of batter for varieties of candy and oversaw the workers on the production lines (who I recall as being all middle-aged women). Jeff viewed the Book of Proverbs as essential reading for business; Bruce read Brother Lawrence's "The Practice of the Presence of God" and wanted more of what Brother Lawrence described.

All of these memories arose in my mind while I loitered in The Milk Shake Factory, and with them, feelings of affection rose in my heart. I had loved these people, and would love to reconnect with them.

That desire lingered with me, and last Wednesday night, at something like 1 a.m., I decided to see if Google would yield a way to connect, or even just current information about the Edwardses.

I typed something like "bruce jeff edwards pittsburgh," and one item stood out from all the others that Google tossed up: an obituary for Pastor Bruce J. Edwards.

That was my friend whom I had loved so long ago, suddenly gone.

Glad to learn that he had become a pastor, confident that he had found the work gratifying and had served others well, saddened that I had missed the opportunity to connect with him, I gathered myself enough to write a note in the online guestbook.

And tried to absorb fully the import of this fact: he was 60 years old.