I don't look for this stuff, honest. And I don't want to be hypersensitive. But sometimes things just assault my eyeballs.

So...I just discovered Think Progress blogger Alyssa Rosenberg, who this morning posted a link to a Hollywood Reporter video in which writer-director Steve McQueen, who is Black, asks some of his white colleagues why they don't hire more Black actors. Go ahead and watch it, right now. It sizzles.

This clip was also my discovery of Steve McQueen, so I went to IMDB to learn more about him. I didn't recognize the titles of the movies he's done, but I did recognize the title of the one he's working on now, "Twelve Years A Slave," because I've seen (not read, yet) the book on which it is based.

The book is the autobiographical account of Solomon Northrup, a free Black man from New York who was kidnapped and taken into slavery in 1841.

When I clicked the title for more info about the movie, this page came up: 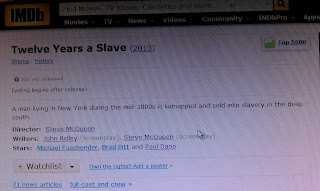 I thought that perhaps it was based on a different book. Or maybe my recollection about the book was way, way, WAY off...was there some white guy who became a slave for twelve years?

Only by scrolling down did I find Chiwetel Ejiofor listed - behind Fassbender, Pitt and Dano - as Solomon Northrup.

Now, Hollywood has a history of finding it really hard to let a story about a Black man really be about that Black man...

...so my first impulse was to label Ejiofor's billing as racism pure and simple. But having recently heard john a powell speak, I'm better equipped to acknowledge its non-simplicity.

powell, (like bell hooks, he prefers the lower case), Executive Director of the Kirwan Institute for the Study of Race and Ethnicity at Ohio State University, spoke about racialization, which is something both more subtle and more pervasive than racism.

powell defines racialization as "the set of practices, cultural norms, and institutional arrangements that are both reflective of and simultaneously help to create and maintain racialized outcomes in society."

In this case, no one involved has to be a racist in order to produce a racialized result. It's not immediately clear whether the order of the cast listing is from the studio or from IMDB itself. Either way, it reflects the cultural and economic reality of star power - IMDB ranks actors' popularity, and Michael Fassbender's StarMeter ranking is 22 (the lower the number, the higher one's rank). Pitt's is 37. Dano's is 1,295.

For an actor, being Black makes it even more difficult to enter the seemingly closed loop in which star billing results from popularity which results from star billing. Thus we have a situation which both reflects and helps to maintain racialized outcomes.