On one of my recent visits to the East Liberty Staples store, I had an urge to buy an ink pen. But not just any ink pen. A classy, beautiful ink pen. I even looked at fountain pens. 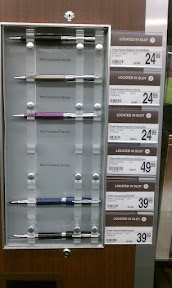 Yes, I considered spending $30, $40 or more on an ink pen. And I found myself asking myself why. It wasn't because I lack writing tools. I wanted something more than a writing tool. I wanted a thing of beauty.

Why did I want a thing of beauty, to write with? To renew my joy in writing.

Okay, maybe not. Maybe it has to do with self-worth. Maybe I want to remind myself that I'm worth a $40-or-more ink pen. When I was at the Post-Gazette, I would have calculated that $40 was about 1.5 hours in wages, and that the pleasure I would get from the pen would be worth 1.5 hours in wages. I want it, I can afford it, therefore I buy it.

Now that I have no income, I don't know how to do the calculus. I may want the $40 pen, but can I afford it? Can I afford anything other than the barest of necessities?

I have tens of thousands of dollars in assets, and a $40 pen would barely affect that. But it would be an expense without matching income. Does the fact that I have no income mean that I am not creating value in the world? Does it mean that I don't deserve a $40 pen, because people who are not creating value in the world do not deserve anything from the world?

Am I in fact, thinking of buying a $40 pen just to remind myself that I am worth it?

Such was the mire into which I was sinking, when I saw these: 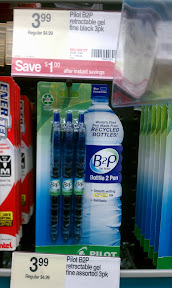 "Wow!" I thought. "Pens from plastic bottles! How cool is that?!"

The decision to buy them required little thought. Especially since they were on sale.

So now I have three new pens, plus the good feeling from helping to reduce the amount of plastic debris in the world.

posted from Bloggeroid
at 3:48 AM

$40 Pens are for people with more dollars than cents/sense.