But Seriously, About Donald Trump...

Nothing against Alec Baldwin and the SNL crew, or Stephen Colbert or Trevor Noah or Jimmy Kimmel, or any of the other professional jesters who have found a goldmine in the 45th presidency of the United States, but...

I can't laugh at Donald Trump any more.

On October 25, 2017 - the day after Sen. Jeff Flake (R-Arizona) announced his resignation because of "Reckless, outrageous and undignified behavior...from the top of our government" - Ron Reagan, appearing on Chris Matthews' "Hardball," summed up the matter by saying, "Donald Trump is a deeply damaged human being." (8:15 in this clip)

I suspect that it was the type of reflexive laugh that sometimes occurs in response to scary things. To seriously consider the humanity of a political figure can be scary, both because it can force us to lay aside the comfortable contempt with which we sometimes regard them, and because it may show us something of ourselves in them. I don't fault Matthews for laughing, but I think it's unfortunate that doing so prevented the serious conversation that might have occurred, about what to do with a President who is not well.

Too many of us have laughed too much for too long at a man whose constant need for adulation leads him to make boasts that go beyond being merely false and are consistently absurd:

It's funny once or twice. Maybe even thrice. But after a point, this constant, craven craving to be the smartest, the biggest, the most successful, the best - not only now, but in all of history - becomes sad. It's not enough for us to dismiss the perpetual hyperbole as a con man's habitual selling, when there are no transactions involved, when there is no material benefit to be gained. In fact, that may be the most telling characteristic of these tall tales - beyond being false, or even absurd, they are totally unnecessary. They serve no discernible purpose, other than slaking - but never satisfying - his perpetual thirst, providing morsels for his insatiable hunger.

That thirst and hunger make Donald Trump, not a comic figure, but a tragic one.

Trump's neediness, dishonesty and delusion make him, not only a tragic figure, but a dangerous one.

In "The Dangerous Case of Donald Trump: 27 Psychiatrists and Mental Health Experts Assess a President", Gail Sheehy (author of "Passages") contributes a chapter titled, "Trump's Trust Deficit Is The Core Problem," in which she points out that "Donald Trump has boasted of his total lack of trust...his father trained him to be a 'killer,' the only alternative to being a 'loser.'" In the closing paragraph, she writes:

"Beneath the grandiose behavior of every narcissist lies the pit of fragile self-esteem. What if, deep down, the person whom Trump trusts least is himself? The humiliation of being widely exposed as a 'loser,' unable to bully through the actions he promised during the campaign, could drive him to prove he is, after all, a 'killer.'" 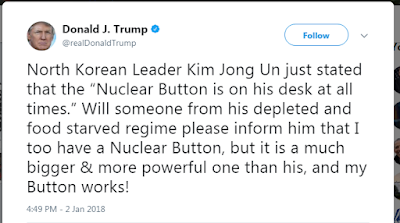 Like a cop who responds to a mentally ill person with a knife by shooting them dead, Trump escalated, rather than de-escalating, a situation that put him on edge. This is a bad way for America's chief diplomat to respond to a diplomatic challenge, and all by itself, it shows that Trump is unsuited for the job.

The men and women of America's military deserve a more trustworthy commander in chief.

Now I'm going to risk being accused of doubletalk, as I answer an obvious question: Am I saying that the satirists of the world need to stop highlighting Trump's absurdities?

No, I'm not. All of the people named at the beginning of this piece know their craft well enough to know that the most powerful satire is always, at bottom, deadly serious. In the face of continuing absurdity, satire may be the best journalism.

But I am recommending that we all be as serious as the best satirists are - that we all be careful to make a distinction between laughing at Trump's words and actions, and totally dismissing the man himself; that we guard our hearts against contempt.

I am suggesting that perhaps pity would be a more appropriate emotional response to the man himself; that when we laugh at his words and actions, we should honestly face the fears that they evoke. And even, for some, the rage.

Finally, I'm saying that we should let all of the emotions that Trump inspires in us move us to action. That's what emotions are for, to energize motion.

Conversing with fellow citizens about the 25th Amendment might be a good place to start. But if that's not for you, then find out what is. To quote the amazing Jenifer Lewis: DO SOMETHING.