One of my favorite people died today. 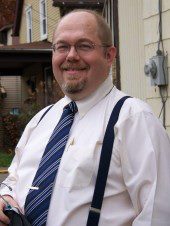 His name was Dan (Daniel J.) Jendrey, and his death was unexpected and pretty sudden, following a heart attack Sunday evening.

But this isn't about how he died, it's about what I saw of how he lived (many others are remembering Dan on his Facebook timeline).

Dan and I met when I took a temp job, which became permanent, as a data entry clerk at Mellon Bank, encoding checks on the midnight shift. I think it was 1996, maybe early 1997. He was a fellow keystroker, and during our lunches and breaks (10 minutes - grrr!) we became friends.

He was perhaps than a little taller than me, but portly enough so that my nickname for him was "P.B.", for "polar bear." Had he been an actor, I think he would have made a fine Ben Franklin.

He was smart. He was funny. He was generous. He was creative. He was entrepreneurial. He was diligent. He was proud.

One Halloween, the midnight crew at Mellon was allowed to come to work in costume. Dan came in smudged and with tattered clothes, and carried a styrofoam cup, on which he had etched with a pen the words, "Will key for food."

For anyone to do that would have been amusing. For Dan to pretend to beg was hilarious. The pride thing, you see.

The only thing that made it better was that some people actually put money in his cup!

He served Mellon well enough to receive a promotion, and then to move out of the data capture section altogether, into a day job as a programmer. But from the day I met him, like Andy Dufresne in "The Shawshank Redemption", he was working on an escape plan.

The particulars of the plan changed. When we met, he was an Amway distributor. While still doing that, he made a few bucks repairing computers; he may have even conjured some cash from building websites.

The quest for extra dollars was one big thing we had in common. When I formed a commodities trading limited partnership, he was quick to join, and did a better job of selling it to our co-workers than I did. (It turned out poorly, mainly because I was in so much of a rush to impress people that I ended it too soon.)

Another shared interest was movies, especially sci-fi and fantasy ones. At Mellon, we shared a running joke: one of us would say, in a high-pitched voice, "Genesis?!?" And the other would reply, "Yes, Genesis! How can you be deaf with ears like that?" (For the impatient, it's at 1:32)


Eight years ago, he told me that he was considering signing up as an associate with PrePaid Legal, a company that provided legal services at a discount to its members. They were a public company, so I did some basic research that helped him decide to take that plunge.

I was his first customer, and the first associate that he signed up. I didn't do anything as an associate, but he - being diligent - did, and over the course of eight years grew into a knowledgeable, confident leader within the company (which is now privately-owned Legal Shield).

He also went from zero to creating a nice residual income. His example, as much as anything, is why I'm finally beginning to do the work of a Legal Shield associate.

That is not just because I want or need the money. I do, but that is not the only reason. It is also because of how I saw his growth as a Legal Shield associate tie in to his growth as a man. I saw him demonstrating generosity in larger ways, not just as an expression of his character, but as a business strategy.

For example, he formed a business owner's group that helps local businesses owners to network with each other. They meet once a month. He never charged anyone to join. When we last met, he showed me a newsletter that he had created for the group, which he would distribute for free, and in which the business owners could advertise, for free. All to the end of building relationships, in the confidence that it would pay off in the end.

As an associate, I want to be like him when I grow up. And I want to grow up soon.

And with all his smarts, with all his humor (he LOVED to laugh), with all his generosity - Dan was a Republican, and a self-proclaimed conservative. I suspected that with the right nudge, he could turn Libertarian.

And here's the thing - with Dan, I think that would have been fun. Because he was such a fun guy.

I don't necessarily regret not having done that. I do regret not having had a serious conversation with him about faith. I think the cultural taboo against discussing religion makes us dishonor one another by pretending that faith is not one of the most important things about us.

Dan had two sons from his first marriage, and gained two daughters when he married his second wife, Brenda - during the half-time of a Steelers game in Heinz Field: 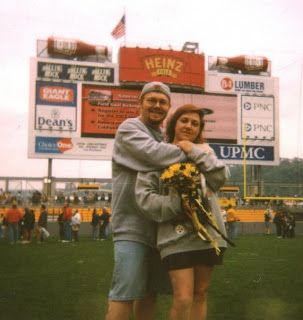 I can't imagine their loss; I am still processing mine. I loved that guy, and I'll miss him.

What a great sentiment about someone that was certainly a good friend. So many people have "no friends" so take comfort in having had a great relationship with your friend.

Thanks, Sis PD. I appreciate that.

Elwin, thank you so much for writing this. Dan was a very good man;
I will miss him, very much.
~Emil

I certainly will miss him
he was an amazing man. I saw him at work daily at Quest and he was a delight to all. During lunch he shared himself deeply. He loved his family so much. He was loved.

Thank you Elwin! For remembering all the good things about Dan. He leaves a big hole in my life! Love your advice to take joy in Dan's life and friendship and spit in Death's face.
+ + + Donna + + +

Nicely Said Elwin. I am from the first family. The boys lost a good friend & great father. He was always a part of their life. I was his past & Brenda is his present. But I will always have that connection with him.

If this is Dan's first wife, I apologize for not remembering your name, but I am glad that you found your way here. I am sorry for your loss as well.