Building a billion-dollar enterprise, 14 - Notes in preparation for a really big day

This is my schedule for tomorrow:

This day, all by itself, could move my life forward to significant degree. More than that, it could affect Homewood.

Meeting #1 - Joe Ciotti is a management consultant with the Small Business Development Center at the University of Pittsburgh. We will talk about Luminaria Productions. I hope that we will agree on a schedule for regular meetings for at least 3-4 months. I have found regularly-scheduled meetings to be a huge help in living my life, and I believe that having a schedule with Joe Ciotti will help me to achieve breakthrough on completing my business plan for Luminaria, and on enchancing my doing of what I'm already doing.

Come to think of it, I may benefit most from intensity of scheduling - not once a month for 3-4 months, but once a week or more for 4-6 weeks.

I have been stuck on writing a business plan for two years. Which obviously means that I don't want to do it, for whatever reason(s). But since it's part of their process, I need to get it done.

I think the key is to convince myself that a business plan can be gigantically valuable and fun. With that feeling, I could write it in a day.

And it can be. It can be gigantically valuable and fun. How? By making it include, not only every single thing I want to do with this business, but everything I believe about business, period.

When I let myself think about business - not just a business, but business itself, I uncover a depth of feeling that almost invariably surprises me. There's God, and there's everything else. But in that "everything else," business rises close to the top among things that are good and noble.

Yeah, that's what I said: good and noble. Read it again if you have to. I consider the creation and exchange of value to be inherently good, however often or to what degree it may be twisted into bad.

I won't finish the business plan tonight. But I do want to give Joe enough to seduce him, to make him consider it worthwhile to meet with me on an accelerated schedule over the next 4-6 weeks. Because in 4-6 weeks, Luminaria Productions could be operating on a whole 'nother level. More about that in #4

Meeting #2
Joshua Devine recently graduated from Penn State with a degree in Energy, Environment and Community - or some alternate arrangement of those three words. When he saw the segment about the Save Race Street Committee on Rick Sebak's program, "25 Things I Like About Pittsburgh," on WQED, he tweeted me to ask if one had to live on Race Street to join the Committee. He attended our January meeting, and I hope to explore with him how he can be part of our life and bring his knowledge, energy and connections to our work. He could help the Committee to move up to a higher level.

Meeting #3
Ashton Armstrong is a neighborhood service associate with the Mayor's office, part of the staff for the ServePGH Initiative created by Mr. Ravenstahl's administration. This meeting is to talk about how the Save Race Street Committee might take advantage of two programs to work with vacant lots on our street - the Love Your Block program, and the Edible Gardens program. We have missed deadlines, because I have missed deadlines. In this meeting, I need to submit information late, plead for more grace, and if possible chart a corrective course with Ashton.

The greater part of my work relating to this is not to be done with her, but with myself, my fellow Committee members and with our neighbors. I need to remind myself of the importance of delegating and supervising. The better I get at those things, the more useful I will be, because I will be in less of a position to screw up the details. I need to keep very alert to the question, "Is this a task that I should NOT do?"

Success with Ashton, and then with my fellow Committee members and with our neighbors, will mean a more beautiful and prosperous street.

We are meeting to discuss my desire to acquire and redevelop this building, 1015 N. Homewood Avenue: 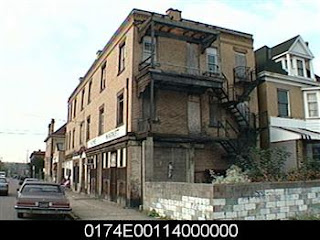 I moved to this house in July, 1986; 1015 N. Homewood was vacant then. I have long had a vague desire to do something with it. Over the past year, the desire has become more specific, but not specific enough to be a plan.

I want to make it the headquarters for Luminaria Productions.

About two weeks ago, I saw a gentleman from the City's Bureau of Building Inspection poking around it, and introduced myself to him as the chair of the Save Race Street Committee, and he told me, "We're tearing it down."

That surprised me, because over the past year, I have not only developed a more specific desire for the building, I have had conversations that I thought had positioned me to acquire the building from the URA (not that that was guaranteed, but that the conversations were making it possible). And the building - which has been condemned since 2005, and tax-delinquent perhaps as long - went through a Treasurer's sale in October, which I thought meant that the URA had taken title.

So I started talking to people, the last of them being Ms. Abrams. And she set up the meeting.

As of now, this is what I see at 1015 N. Homewood:
First floor: Luminaria Productions office, which includes a rentable meeting space. A bookstore, which includes a cafe.
Second, third floors: Apartments.
The entire building, including the decor in the halls of the second and third floors, has a movie theme. The bookstore's draw is that it has the most complete collection of film-related books in the city of Pittsburgh. Also movie memorabilia. And DVDs. And the cafe has a viewing area, and is home to meetings of the East End Film Nation (which doesn't exist yet, but you can guess what it is, right?).

That's what I have so far. Oh, and maybe, just maybe, offering discounted rents to film workers who live in the building.

And maybe making a documentary about the redevelopment of the building. Sponsored by Home Depot, and anybody else who might want consider it good PR to participate.

There's also a persistent notion of housing a video game academy: a place to teach young people how to create video games. That would require more program development than I have come close to imagining.

Anyway, tomorrow's meeting could end with everyone saying, "We don't think this is at all feasible. Good luck with doing whatever you want to do in some other building." Or it could end with, "We'll work with you, if you work with us." The latter would put Luminaria Productions, and ultimately Homewood, on a whole 'nother level. Especially in light of what's happening Wednesday and Thursday.

But that is another blog post, because this one is too long already.
at 11:29 PM

Wow -- this is exciting and encouraging. Gives me more ideas about how to balance my life between living in Homewood and working in Wilkinsburg. I need to spend more time at home! You can always delegate to me -- I prefer as much notice as possible because I am employed full time, but you know my work quality already.