The new adventures of old Coke

Over the past few years, I have noticed interesting and attractive design popping up in the most unexpected places.

Last Thursday and Friday, Janet and I drove down (well, I drove; she rode) to Louisville for my mother's 93rd birthday. It was about lunchtime when we arrived in the city, so I pulled off to grab lunch at a Dairy Queen. When I went in, I saw a soft-drink dispenser unlike any I'd ever seen: 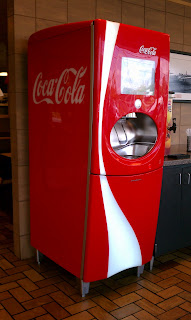 Something about its curvilinear shape made it seem to lean forward as if it were offering to serve, and I found myself thinking of Rosie, the Jetsons' robot: 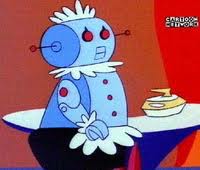 I half expected it to speak when I approached, but instead it silently presented me with the opportunity to choose from a larger selection of drinks than I remember ever seeing in a machine before - and presumably, even the opportunity to mix drinks (I didn't): 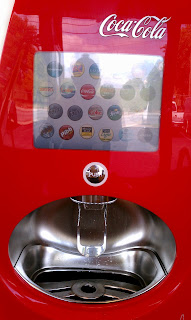 Now a quick Google search uncovers a YouTube video that was uploaded in August, 2009, letting me know that either Pittsburgh is way behind the times or I just need to get out more. Or both.

So, it's called the Freestyle. And it has not only been in existence for three years - it has its own website.

Huh? Why in the world would a pop machine have its own website? Playing with it a bit reveals several reasons - so that you can learn how to use the machine; so that you can find out where the nearest Freestyle is located (looks like the only two in Pittsburgh are in Oakland and the Strip District); so that you can download PUSH! +Play, a machine-related game app that was introduced in June 2011 (where have I been?), to your phone.

Apparently, Coke has been having a lot of fun with their machines that I have missed. In July 2010, they installed a "friendship machine" in Argentina, that required people to collaborate in order to use it:

And later that year, they placed "happiness machines," that dispensed bonuses ranging from extra drinks to cookies to t-shirts, on several college campuses:

I've wandered from my original intent, which was just to say that I think the design of Coca-Cola's new soft-drink dispensers is pretty cool. Now I'll say that Coca-Cola, which I might have described as a boring company (BORING IS GOOD!) has been doing interesting stuff with their machines for a while now (and generating a bunch of YouTube material along the way).

They've also lifted their share price by 43.14% in the past five years, compared with with a 3.31% drop in the S&P 500 during the same period. That's sweeter than high fructose corn syrup.

I leave you with this bit of cheerful improvisation that led people to get out of their cars in bumper to bumper traffic on a highway - an economist (or a neuroscientist?) could have a field day exploring the interplay of incentives, risks, and crowd psychology here: