The outline was based on fragmentary knowledge of two things:

1) The work of Peruvian economist Hernando de Soto, the founder of the Institute for Liberty and Democracy. I learned about de Soto through an article in Forbes magazine in May, 2000, titled "Waking Dead Capital." The article outlined de Soto's belief that the key to the development of poor nations is the establishment of universal property rights - that such rights make prosperity possible because they enable people to use land ownership to access capital. The economic growth of the U.S., for instance, was largely driven by the fact that a farmer could use his land as collateral for a loan to buy a tractor that increased his productivity and his profits.

Reading the article immediately placed de Soto in my personal pantheon; reading his book that came out around the same time, "The Mystery of Capital: Why Capitalism Triumphs in the West and Fails Everywhere Else," strengthened his position there - especially because of what it said about Haiti: that the poor of Haiti held informal ownership of assets worth $5.4 billion, more than the total of all the aid that had ever come into the country. But the value of those assets was trapped in a legal system under which it took 19 years to gain legal title to property. If a more efficient system of property ownership were developed, Haiti might rise out of poverty.

2) de Soto's work had already transformed my thinking when I came across a paper, "The Digital Path: Smart Contracts and the Third World, by Mark S. Miller and Mark Stiegler, in which the authors propose implementing de Soto's ideas by using "smart contracts" - "contracts as program code, where the terms of the contract are enforced by the logic of the program's execution."

The introduction to the paper alone was enough to set my neurons on fire:


Because binding contracts for ownership transfer lie at the heart of capital formation, what if traditional contracts were supplemented and/or supplanted with smart contracts? Smart contracts will enable cooperation among mutually suspicious parties, often without need for legal recourse. Could such a jurisdiction-free contracting mechanism, accessible over the Net, dramatically increase capital liquidity, spawning a flood of new wealth in the poorest areas of the world? (emphasis added)

As the January 1, 2004 bicentennial of Haiti's independence approached, I received invitations for a celebratory cruise to the island. Cruises have never appealed to me - the glowing testimonies of everyone I have ever known who has gone on a cruise have never overcome my lack of interest in spending days at a time on a big boat. But I thought seriously about going on the Haiti Bicentennial cruise, for one reason: to convene a meeting to discuss the possibility and feasibility of implementing smart contracts in Haiti.

That meeting is what I wrote the outline about. I listed the parties that I would want to have present:

I listed the sub-meetings that I thought should happen, and the desired outcomes of each:


And commitments for people to make publicly, to everyone:

I drew a chart to show how implementing these agreements could produce money for everyone involved (the oval at the upper right says, "Combex people" - i.e., Miller, Stiegler et al): 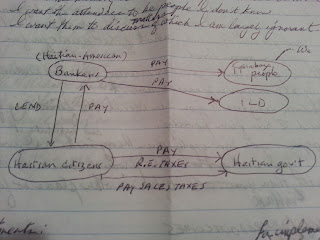 I even imagined what I might say to the different parties to induce their participation:

None of that ever happened, but it also did not disappear from my brain. When, for a time, I had substantial extra cash (gone now, alas), I considered creating a foundation to fund the development of property law in Haiti. Can't do that now, but maybe I can spark some thinking and some conversation and some connections that can refine this stuff and make it work.

Of course, the earthquake may relegate all such thinking and conversation to the realm of fantasy. Or not. By posting this, by making it public, I surrender all expectation about what will happen, and place it in the realm of pure possibility.

Could a software-based scheme of titling and transferring land, and of lending based on the validity of such titles and the value of the land, help to lift Haiti out of poverty? If so, what might it take to make that happen?
at 8:23 AM